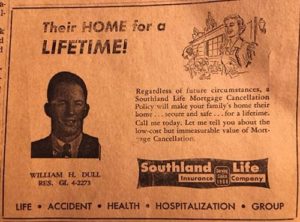 Operations started in 1963 in downtown Harrah, Oklahoma. Bill began selling life insurance to family and friends. Family and friends first benefited from Bill selling insurance. From there he started selling property and casualty coverage to the community.

As the business grew, Bill’s wife Barbara left her job working for the State of Oklahoma. She joined her husband in the family venture. Around this time, a local home builder J.B. Jaggers approached Bill and Barbara. Jaggers wanted to see if they would be interested in selling the homes he was building. Never one to miss an opportunity, Bill, as well as Barbara, jumped on the offer. Thus, Dull Insurance & Real Estate was born. This also led the Dulls to dabble in property development and homebuilding. The Dulls developed the Harrah Woodcrest Estates and Horseshoe Lake sub-divisions. Several of the houses built can be seen in the town today. 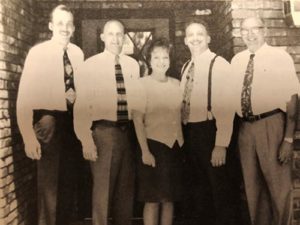 Eventually, Bill and Barbara left the real estate and home-building businesses behind. They purchased a few smaller insurance agencies. Focus shifted to growing their property and casualty business.

Around 1980, Dull Insurance merged with the Ewton Agency of Choctaw, Oklahoma. After this merger, Bill changed the agency’s name to Omega Insurance Agency. He bought the barn-shaped office building in Choctaw, Oklahoma. This is where the agency is currently located today. In 1992 Barbara retired from the business.

In 1997 Bill and Barbara began shifting ownership to three sons, Russell, Scott, and Dean. In 1998, Bill retired from the business. Today, the agency is run by the Dull brothers. It remains an active business within the community. Omega is currently a member of the: